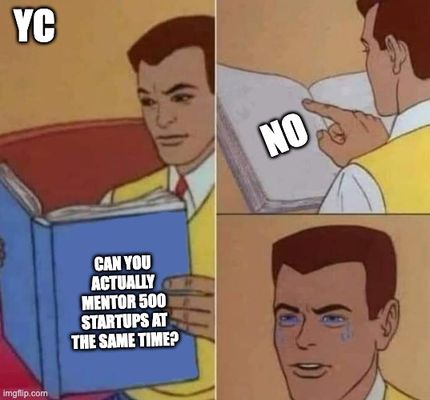 This meme is inaccurate. Nobody in YC leadership has cried for at least a year. In 2021 alone, YC had three different companies go public (Coinbase, Gitlab, Matterport) and it has been all smiles from there. It's rumored that Paul Graham hasn't cried since he reached startup enlightenment and invented Software-as-a-Service back in 1995.

What's less smily though is that only 250 startups will be adding YC S22 to their social profiles this go around compared to 414 from their most recent Winter batch. Lindsay Amos, Director of Communications for YC, announced earlier this week that they have cut back due to macroeconomic conditions and the "realities of being back in person." Although they cut cohort size, the new larger deal they offer startups remains the same. Earlier this year YC increased their standard $125K for 7% deal to include an additional $375K follow-on at a valuation determined by the a startups later investors.

Y Combinator was originally founded back in 2005 by a team of hackers and misfit philosophers (kind of) who thought there was a better way to guide inexperienced founders. What they've been able to accomplish since then is nothing short of incredible and it's safe to say that they have shaped the startup landscape we live in as much as anyone. However, they haven't gone without criticism.

The most common point of contention around YC in recent years has been their expanding cohort sizes. From their founding to today, they have grown from cohorts of ~20 to a recent height of ~400 and have now cut back to 250. How can they expand and keep quality high? How can each founder in a batch of 250 get the same mentorship as a batch of 25? A star studded debate is happening as we speak.

Sarah Guo, former Greylock Partner, voiced this point of Twitter stating: "[YC] is a unique force in the ecosystem, but its almost-decade long push for maximum scale has diluted the brand, community, advice, and quality-signaling value prop to founders. A class of 250 is still massive."
Paul Graham, YC co-founder and startup yogi, responded with this: "YC has been growing not just for a decade, but since the beginning. And there was always one constant: at every stage there were people who said YC was now too big."

Garry Tan, Founder of Initialized Capital and former YC partner, jumped in as well: "We will all check the receipts in 10 years and doubters will be surprised. Bet."

I think the reality is that the YC value prop has changed over the years. What started as pure small-batch mentorship has grown to be a balance of education, brand, and network that looks more like an elite university than an accelerator. What YC may have lost in 1-on-1 founder time, they seem to have made up for in name recognition and network. Even with new competition from programs at Andreessen and Sequoia or upstarts like Launch House and On Deck - it's hard to imagine YC not staying on top regardless of cohort size.

I also generally don't think it's wise to bet against Garry Tan on anything startup related.