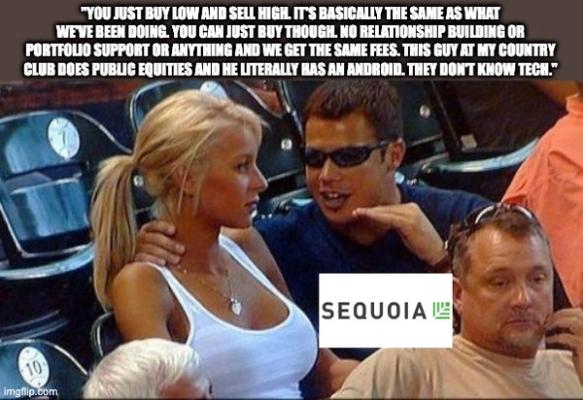 Famed startup investors like Accel, Lightspeed, Sequoia, and Andreessen have wandered down to the local Spirit Halloween pop-up to pick up their public market investor costumes. The WSJ recently reported on the phenomenon and some of the quotes are just fantastic:

"There’s a lot of interest in where firms can go beyond being a traditional venture capitalist." - Byron Dailey, a partner at law firm that helps venture firms raise new funds.

Which I read as: "There's a lot of interest from VCs to get to the Fuck-You-Money-AUM-Level that their Hedge Fund friends have and they just can't feasibly put that amount of money to work in private markets."

Or my personal favorite:

Which I read as: "Stay in your lane. We have people for that."

Always a tickle to see the Big Dogs get Big-Dogged.

To explain how we got here:

Venture firms are sitting on record amounts of cash and are reportedly still not loving their options in the private markets - especially in the later stages where big chunks of capital can be put to work. Meanwhile, in the public markets we're seeing household name tech companies trading at multi-year lows. For investors like Marc Andreessen who missed Jack Dorsey's Block Inc. (fka Square) in the private markets (oof) this feels like a second chance to get involved in a meaningful way.

None of this would be possible without the legal reorganization that firms like Sequoia and Andreessen went through in the last few years to become Registered Investment Advisors ("RIA"). As an RIA these firms are now legally able to own things like public stocks and cryptocurrencies.

It's easy to punch up on this topic and poke fun at VCs jumping into the public markets (as seen above). That being said, the larger vision here - which I think is a valiant one - is for these mega funds to stretch across the full lifecycle of a startup and founder - from pre-seed to post-IPO. The rollout has been a bit shaky with no help from the larger economy, but it will take at least a few years to see how it actually plays out.