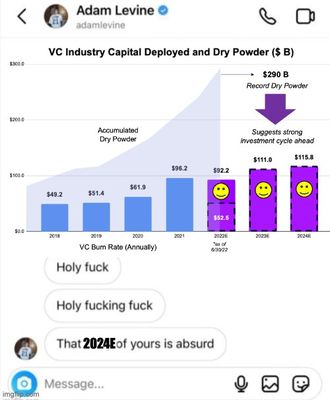 I'm honestly not sure what I thought was going to happen here. I was very aware of the fact that VC funds had raised records amounts of money, but when the whole industry went on vacation for what felt like 2 months there was a part of me that worried they might not come back. That they would just stay in Europe forever. Give up the game and retire to a small town in Provence...

But the numbers are in and the show must go on. I'll tell you one thing I do know: They're not going to give the money back to LPs. So, there's only one place for it to go: Into startups.

As Jon Sakoda, founder of the early-stage venture firm Decibel Parners and former GP at NEA, said best: “You really can’t bet against gravity. The funds have to flow.”

To put this all in perspective: Sakoda's research quotes U.S. VC investors to be sitting on $290B, including $162B specifically for new investments (rather than follow-on). 2021 was a record breaking year with $96.2B deployed - up from $61.9B the year before. 2022 is only down 4% in the first half of the year despite it feeling slower and 2023 is expected to set a new record at $111B. It's hard to wrap my head around what that will look like, but with Sakoda's help - I'll take some guesses anyways:

Normally if I see big top-line numbers like this I assume most of the "size" (tbt) will just go into growth stage mega rounds. Some of that will still happen, but with public market tech valuations down significantly it's hard to make the numbers work on those types of deals. Capital will have to push into the earlier stages to find valuations that leave room for upside. This means more cash for everyone else and Jon expects "the early stage market to be one of the most vibrant areas of investment in the coming quarters."

At Stonks we have definitely seen things pick back up in a significant way after a slow August and it seems like things could accelerate into October. So put down that Aperol Spritz and throw an extra-shot in your Pumpkin Spice Latte because the good times are back!