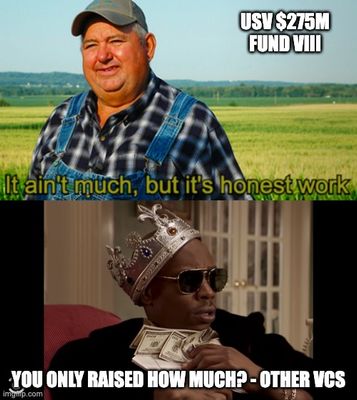 I've been a certified Union Square Ventures ("USV") fanboy for a while now. I even threw my hat in the ring for an analyst position back in the day. I didn't get the job, but I did make a case in my application for Bitcoin being undervalued at $7.5K. So I'll always have that.

If you're not familiar with USV already, Mario Gabriele wrote a great deep dive on them this year entitled "The Thinkers" you can check out here.

What's most impressive about USV is their discipline. They keep funds small. They follow their thesis. They pass on hot deals when the valuations don't makes sense. They sell once they've achieved their goals.

To say they have been successful would be an understatement. They count Twitter, Zynga, Coinbase, Tumblr, Etsy, and Indeed as wins.

When they talk I listen, but they don't talk much. So last week, when Kate Clark of The Information published an interview with USV Managing Partner Albert Wenger, I was excited to jump in. Here are my favorite quotes from Albert:

We recently launched Secondaries on Stonks. If you think some of these discounts are overreactions and might want to invest, give it a look here.

Interviews like these are a great way to get some insight from the top. As the year comes to a close, I expect to see a lot of top managers putting out similar content. What happened these last couple years? How are you thinking about it? We are in a similar reflection process here at Stonks.
We see the dust settling in private markets. We're not out of the woods yet and may see Seed stage valuations come down a bit before deal counts get back to a healthy levels. December is never a good time for early-stage fundraising, so we won't really see enough data to discern a trend until late January. On the opposite side of the spectrum, we have seen buyers and sellers come back to the table in the secondaries market in hopes of closing transactions before EOY.

What stands out to me the most in all of this though is that first quote:

In 2023, investors who can recognize overreactions and put aside their fear will have a rare opportunity to invest in winners at big discounts to what leading firms paid a year ago. Recognizing overreactions is easier said than done and we will see some Dead Cat Bounces along the way, but if firms like USV are heading in that direction I don't think it's a bad idea to do the same.

Other Stonky stuff to be aware of: