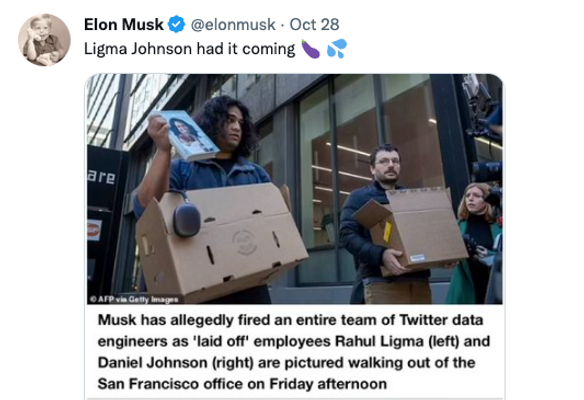 If you haven't already heard, it's officially layoff season and although the image above was a prank - most of the layoffs are very real. Big tech is headed into a hiring freeze (or at least heavy slow down) with recent announcements from Google, Apple, and Amazon. Outside of FAANG we've seen a slew of tech layoff announcements this week: Twitter, Stripe, Lyft, Affirm, CloudKitchens, Delivery Hero, OpenDoor, Chime, Dapper Labs, Gem, MessageBird, Kry.

The exact reason for layoffs is different from company to company, but in general companies are tightening their belts ahead of a looming recession. Patrick Collison, Co-Founder and CEO of Stripe, said it best in his letter announcing the 14% layoffs: "We overhired for the world we’re in."

This is a big sign from a bunch of smart people with access to a lot of data that we're heading into some hard times. These layoffs can be seen as abrupt, but it's generally consider best practice to cut once and cut heavy rather than chip away when it comes to preparing for a storm. Sequoia touched on this in their May 2022 "Adapting to Endure" presentation - specifically on their "Survival of the quickest" slide that urges founders to avoid the "death spiral" of incremental cost cutting.

As we see layoff announcements roll out across the internet there have been a variety of different strategies, but none as different as Stripe and Twitter. On one hand, Stripe and Patrick Collison delivered a heartfelt and generous goodbye. On the other, Twitter and Elon Musk sent a cold and direct explanation of next steps. Here are links to each for you to have a look for yourself: Stripe | Twitter

I think it's easy to look at these two announcements and say nice things about Stripe while wagging a disappointed finger at Twitter - so I won't. Here are less popular opinions on both:

On the Twitter side, this was due to happen with or without a recession for a famously bloated organization. Hence the go private strategy and takeover in the first place by someone who famously runs a tough operation without much empathy. People (including Twitter employees) shouldn't be so surprised. In a takeover like this it's also important to cut access without warning in order to protect proprietary company data. If you tell people they have two weeks to clear out they're more likely to take stuff with them that they're not supposed to.

For Stripe, it's easy to give the "no one saw this coming" excuse, but there are notable competitors with lower headcounts doing similar payments volume. Patrick Collison is a great communicator, but it doesn't change the underlying actions. This is can be more harshly seen as a "we bet big on growth and it didn't work out, so we have to cut heads" which isn't typically viewed so warmly and is hidden under a well worded veneer of "aw shucks the market went bad on us" storyline. Stripe is getting the nice guy treatment, but doing the same thing as most with some extra money sprinkled on top.

To take the foot off the gas a bit: Yes, Twitter could be nicer about it. Yes, Stripe's severance package is generous and well executed. We'll see how it all plays out and I hope everyone affected lands on their feet.