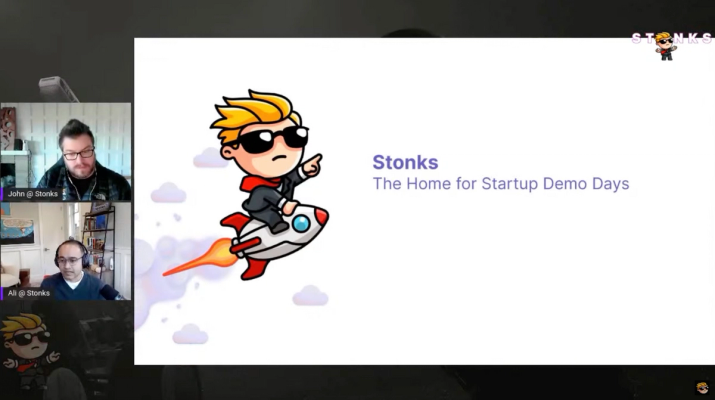 On January 22nd of 2022, Stonks ran a Demo Day for itself! It was an epic day and an awesome chance for us to get the community on the cap table. Looking back, it's crazy to think how far the platform has come since then. Here's a recording if you're feeling nostalgic.

We raised over $2M that day and kicked off a great year of events hosted on Stonks. Not so long after that, we hosted Latitud who raised over $1M and from over 1,000 live viewers. They put together a great event and showed us that startups besides Stonks could have similar success on the platform.

Of our Stonks Demo Days - I have a hard time picking favorites. We have gotten to meet a ton of incredible founders and investors along the way. If I had to choose one though, I think it's hard to pass over the "Web2 vs. Web3 Battle" we did for Demo Day 8. We had over 1,500 people tune in live to watch 8 rockstar founders pitch 5 thoughtful panelists.

Another member of the +1,000 live viewers club I have to mention is our (unofficial) YC Alumni Demo Day from September. Immad, Ryan, and James have been incredible panelists for those events and have really shown us the value of repeat appearances.

Then the Twitter acquisition started to happen... We had never done a late-stage deal before, but we thought it was too interesting to not try. So we pulled in some great panelists and found a way into the deal! The event we did for Twitter ended up bringing in +$15M of signed LOIs and provided unique context to a deal everyone was talking about. The Twitter deal showed us that their was appetite for all types of opportunities on Stonks - not just Seed stage or Post-Accelerator deals.

Most recently, we have continued to explore these late-stage opportunities and I'm proud of the event we were able to put together for SpaceX. We brought in 4 panelists and a great moderator to not just talk about SpaceX, but to educate the audience on how they think about investing in Aerospace.

It was a great year and we learned a lot! In 2023 we're excited to bring you new formats and to continue to improve on the classics.