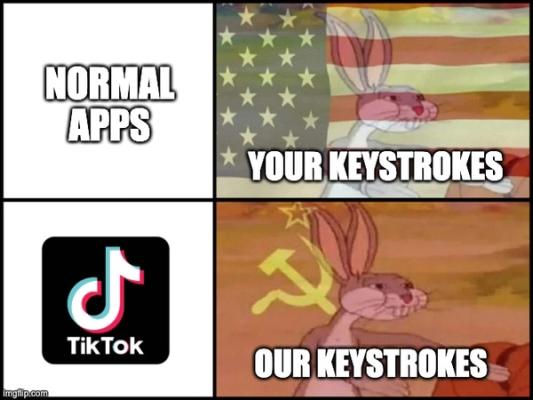 Trying out a new format here. Below you'll find three stories worth knowing about with relevant links. Like the new format? Hate it? Let us know by responding to this email.

Takeaway: It's sketchy that TikTok is run by a country that openly hates the United States, but the tech they're using to track users is also used by other tech giants like Zuck.

The water coolers of the internet have been surrounded by talk of a new report that found TikTok tracks your keystrokes. Felix Krause, a software researcher based in Vienna, published the report on his findings last week and a TikTok spokesperson has since responded that: "The Javascript code in question is used only for debugging, troubleshooting and performance monitoring of that experience." Everyone was totally satisfied with their statement and has totally moved on... Just kidding. Their statement was basically completely ignored. Calls to ban TikTok from the US have resurfaced and look prime to heat up ahead of midterm elections due to fears of tampering despite their plans to ban paid political content.

Takeaway: BeReal is growing really fast, which is fun. Zuckerberg is going to copy them. We'll see if people still like it in a year or if people move on or if they get Zucked.

Well that was fast. According to one of their job postings, BeReal has gone from 10K DAUs in March 2021, to 2.93M in April of this year (as reported by Techcrunch), to now over 10M. A year after their $30M Series A from Andreessen, Accel, and DST - BeReal continues to ride the lightning of consumer social virality. It's not all sunshine and rainbows though (to mix weather references). We have seen app-phenoms like Clubhouse lose favor quickly in the past. On top of the challenge to stay relevant with consumers they will also have to avoid getting Zucked. Instagram recently released a test of "Candid Challenges" that - you guessed it - is basically BeReal. *gasp*

Takeaway: Zoom's hot-streak is over and they're back to their pre-covid stock price. People doing more in person stuff. Tech down generally. Cathie Wood (ARK) buying the dip though.

Your favorite work-video-conferencing-service is having a hard time. According to the investment calculator available on their website, a ~$5K investment in Zoom stock in October of 2020 would now be worth a whopping ~$800. Heading into the end of 2020, Zoom was on a hot streak fueled by the Covid inspired work from home movement. In Q3 and Q4 of 2020 they posted revenue growth of over 350%, but have since seen growth plateau and their stock price return to pre-covid levels. Despite all this, Cathy Wood, CEO and CIO of Ark Invest, is buying the dip. Based on their mediocre fund performance it's hard to say how much of a positive signal that is, but it's worth reading up on if you're itching for some public market drama.