The Deals Must Go On 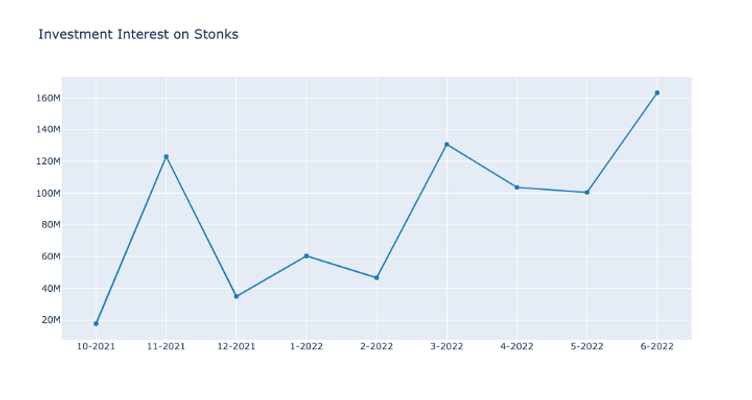 2021 was a record-breaking year for VC, with many early-stage deals resembling late-stage deals of prior years. According to Pitchbook’s Q4 2021 Venture Monitor, 2021 saw an accelerated increase in nontraditional investors moving in to VC to participate in or lead deals, with the influx of these investors helping push VC investments to all-time highs. In 2021, deals led by these investors surpassed $138 billion in deal value. Additionally, traditional investors continued to invest heavily in the space, with VC fundraising surpassing $100 billion for the first time on record in 2021.

As we move into the second half of 2022, the record-breaking times of 2021 may seem a distant past, but the numbers continue to support a robust startup investing market with continued demand from investors in early-stage deals. Internal data at Stonks shows strong investment demand from users on platform, with total interest growing significantly over the past six months. 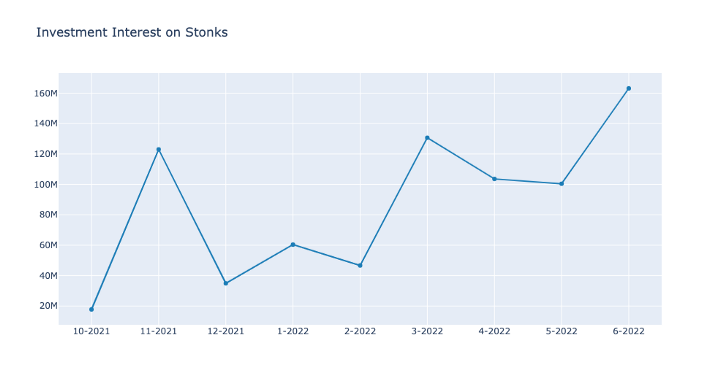 Looking at investment interest generated on Stonks by month, we see relatively strong growth since the start of the year, with June passing $150 million in interest for the first time in company history.

We aren’t just seeing this trend from our internal datasets at Stonks, either. Unpacking Pitchbook’s latest Q2 Venture Monitor tells much of the same story. As IPO markets continue to lay dormant, the majority of market tightening has been felt by later-stage companies closer to public market activity, with other earlier stages of VC remaining relatively unaffected.

The pullback can be seen when looking at US VC deal activity (figure on the left). Deal value for the first half of the year is sitting just above $144 billion, on pace to close the year around $288 billion — with 2021 seeing more than $340 billion in deal volume, this represents a relatively steep drop, despite remaining significantly higher than pre-2021 levels. Deal counts start to tell a different story, with the number of deals completed in 2022 already on pace to surpass 2021 counts.

Focusing on angel and seed stages (figure on the right), we see fewer negative effects, with “Q2 estimated total seed deal count…near the highest figure in the dataset” (Pitchbook).

VC fundraising continues to break records, surpassing $120 billion for the second year in a row. With funds seeing success in raising, dry powder and available capital has ballooned. Even with a slowdown in public market and IPO activity, the amount of funds and investors actively looking for deals and investments has never been higher.

Pitchbook’s VC dealmaking indicator continues to show market conditions favoring startups and founders over investors. The beginning of 2022 has marked the first reversal in this trend in recent history. Narrative coming out of Stonks and the market more broadly indicates a slight disconnection between the data we’re seeing and investor sentiment, with both startups and investors starting to notice a slowdown in deal values. With many VCs and early-stage investors relying heavily on deal flow for survival, consistent fundraising activity and dry powder of more than $290 billion is expected to support strong deal counts over the coming months.