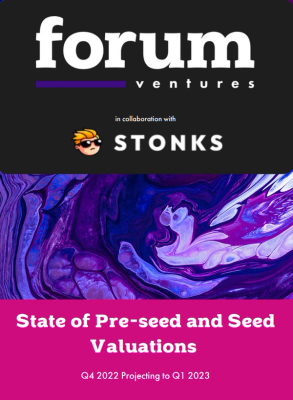 Stonks and Forum Ventures partnered to capture valuation data from 124 completed pre-seed and seed rounds over the last two months.

With this report, we aim to arm founders and funders with real-time information on how market conditions will affect their fundraising so that they can realize successful pre-seed and seed rounds.

Market conditions like these remind us why the expression “May you live in interesting times” is construed as more of a curse than a blessing. In light of interesting—said euphemistically, of course—macroscopic conditions, geopolitical turmoil, trouble in the metaverse, and a myriad of other maelstroms, it’s no fun to be an early-stage funder or founder right now.

That said, hard data has a way of dispelling flimsy sentiment. Contrary to Twitter’s screeching masses, deals are getting done and funds are being funded. More, trouble often begets tremendous opportunity. After all, per a previous Stonks writeup:

Though perhaps initially counterintuitive, some of the strongest performing companies of our generation — Uber, Lyft, Airbnb, Pinterest, Snowflake, Slack, Square, Cloudera, Yammer, and many more — emerged and received funding during [the 2007-2009] downturn.

Looking at company formation data, the creation of these eventual winners spans a lengthy timeline. More, it is distributed almost equally before, during, and after the crisis. This supports the notion that good companies materialize through all sorts of financial climates: good, bad, and downright ugly.

Though companies founded during recessions have a much harder time raising capital, they do benefit from three key advantages:

1) A Focus on Financial and Operational Discipline

With that, take heart fellow founders and funders as even the darkest clouds have silver linings. What’s more: with economic clouds come rains that nourish the fortunes sown in bear markets and reaped in bull ones.

💰 Traction and valuation seemed to be highly correlated, indicating that companies who can prove product-market fit, revenue generation, and customer acquisition will be more likely to secure funding.

🧕 🙎‍♀️ The current market landscape seems to be disproportionately affecting underrepresented minorities, with only 25% of respondents having at least half of their founders that are minorities.