Startup Fundraising and Investing — A Game of Numbers, Maybe Now More Than Ever Before

At Stonks, we are fortunate to sit at the intersection of startup investing and fundraising. In just over 10 months, we’ve completed 100 startup demo days, generated $850+ million of investment interest, and seen more than 40,000 user sign ups come through the platform. Stonks continues to see strong engagement from a diverse number of investor types — close to half of all attendees fall into more traditional investor classes (VCs, Angels), with the remaining half of attendees belonging to more non-traditional investor groups (founders, syndicate leads, other accredited investors, etc.).

In addition to partners and startups generating interest through demo days and pitches, a diverse number of investor types continue to actively engage with startups pitching on Stonks, with close to half of all event attendees identifying as VC or Angel investors.

Daily collaboration and interaction with our users enables us to have a finger on the pulse of the startup investing / raising environment — not just from the investor or startup side, but from both. In conjunction with industry reports and research, the following will summarize our findings and highlight the trends we are seeing in datasets both internal and external to Stonks.

As Pitchbook and NVCA mention in their latest Q2 Venture Monitor,

Generally, seed-stage investments are furthest from the public market, and companies receiving these investments have years ahead before they can hope to join the ranks of the few companies that go on to file an S-1. This has in many ways, insulated seed investments more than the rest of the industry from current economic troubles.

At Stonks, we’ve seen a perfect reflection of this assumption. Not only has investment interest continued to grow QoQ as public markets have crashed, June was also the highest month of investment interest in company history. Early-stage deal counts and valuations have not showed major signs of a slowdown, despite increasing anecdotes from market participants and Stonks’ partners and startups about a slowing deal environment — we’ve found the majority of these anecdotes relate to a change in valuation expectations rather than deal counts or overall volume.

Before diving into recent trends and internal Stonks data, it’s impossible to understand the current state of venture capital and startup investing/fundraising without first unpacking the last few years. Looking at Pitchbook and NVCA’s Q4 2021 Venture Monitor, we note the strong year that was 2021:

US VC-backed companies raised $329.6 billion in 2021, nearly double the previous record of $166.6 billion raised in 2020. Investment activity (measured in both total dollars invested and total deal count) for seed & angel, early-, and late-stage companies all hit records, as did investment activity for companies receiving their first equity round of institutional financing and companies raising VC mega-rounds (sized $100 million or more)…VC firms raised a record-shattering $128.3 billion in new capital over the course of the year, representing a 47.5% YoY increase.

Additionally, we also see the impact dry-powder levels can have on overall deal-activity:

A fair portion of the new VC investment records in 2021 can be attributed to the record levels of capital cycling through the system. VC dry powder continues to hit all-time highs, and an increasing number of nontraditional investors continue to foray into venture to participate in, or even lead, VC deals. 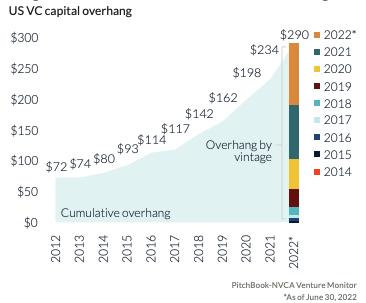 There is currently more than $290 billion in US VC capital overhang — capital set aside for the sole purpose of VC investing. Increasing levels of participation from non-traditional investors has helped drive some of the growth in this pool, providing companies more opportunities to raise capital from a diverse set investors.

Coming out of a record year in 2021, startup investing / financing was strong during the first-half of 2022, despite negative sentiment taking over public markets and headlines. Data from Pitchbook and NVCA’s Q2 Venture Monitor highlights continued strength of VC despite valuations starting to show signs of slowdown:

Momentum of deal activity from the past six months is continuing to bring new deal announcements, which is a positive sign for the market when compared against industry narratives. Deal value has declined rather significantly across all stages, on the other hand. The outsized deals that became a theme of 2021 are not being completed as investors take a more cautious approach to the largest deals in the market. With well over $290 billion in dry powder and nearly 3,000 funds being closed since the beginning of 2019, we can expect these trends to continue for the near future until more certainty can be found across economic markets.

Logically, this makes sense — with investor wallets pinched by broader conditions and public market behavior, it’s only natural for investors to be more cautious as they approach the market, especially when it comes to the largest deals. More caution from investors likely leads to a further separation on price expectations between investor and startup. We’re already seeing the results of this as valuations start to drop. With caution-levels rising among investors, startups able to maximize investor-exposure are likely to be rewarded with completed deals, albeit at lower valuations. Pitchbook’s VC dealmaking indicator (an index showing whether markets are currently favoring investors or startups) shows a slight reversal from recent months in favor of investors.

Activity on Stonks says the same thing: startups that pitch at events with higher attendance see significant benefits from sheer audience size. Inline with Pitchbook and NVCA, we have not seen material shifts in investor behavior at Stonks in the data beyond qualitative anecdotes via user feedback about valuations starting to drop. 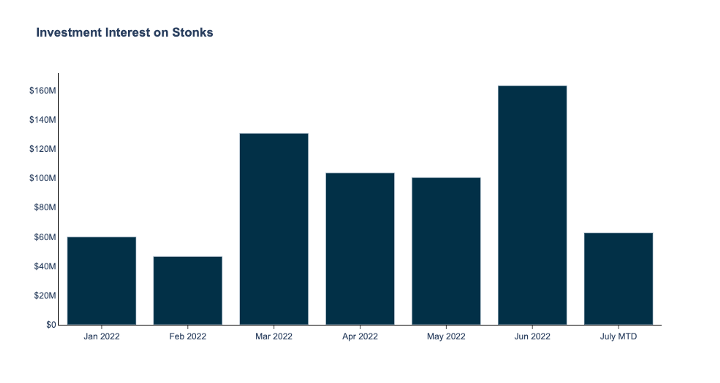 Overall, startups continue to generate strong amounts of investment interest through Stonks. This implies investors are still willing to go through the work of sourcing deals and requesting introductions with companies. Exploring investment interest on a weekly basis since the beginning of the year, we see: 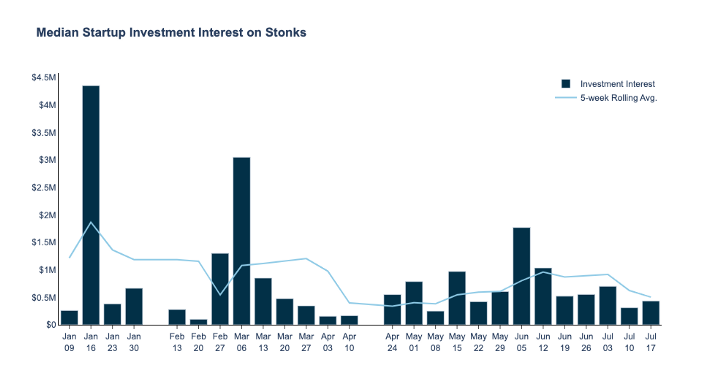 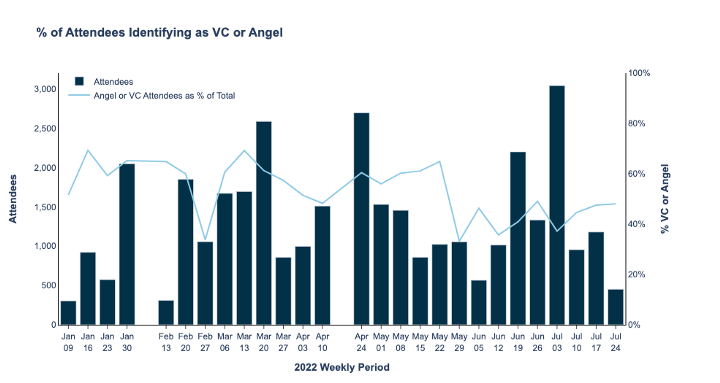 For startups targeting more traditional investors (VCs and Angels), we see roughly half of all attendees at Stonks events fall into one of these two buckets. With the remaining half of attendees falling into different buckets (Founder, Syndicate Lead, Press, etc.), startups looking to connect with a multitude of investor types should benefit from driving investor engagement both before, during, and after events.

The numbers continue to show health within the world of startup investing. Data is starting to show signs of smaller valuations, but the same numbers support continued investor appetite for early-stage deals. With increasing levels of investor caution, the data shows startups optimizing for investor exposure likely have a leg up.

The amount of capital earmarked for startup investing has never been higher. Ripe market conditions, record-breaking funding levels, and an influx of traditional and non-traditional investors in 2021 has helped insulate the world of early-stage investing. In the face of the latest public market crash and non-existent public equities activity, massive amounts of dry capital and high levels of new market participants has helped keep deal volume high through the first half of 2022. As the broader market crash tightens investor wallets, we are beginning to see investor caution rise as valuations start to fall. Despite this increase in investor caution, the numbers don’t look nearly as bleak as headlines and overall sentiment may have us believe. As investor expectations and risk-levels change, startups playing the numbers game will continue to be rewarded: