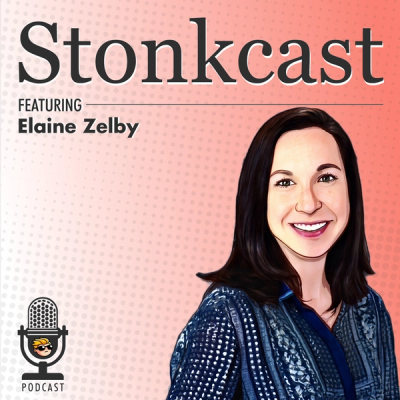 A prolific writer, podcaster, and investor, Elaine Zelby is a busy, busy bee. In light of her personal and professional output, the Stonks crew is unsure where she finds the time to sleep (if she does, that is!).

In all seriousness, we were overjoyed when Elaine agreed to sit down with Stonks Founder and CEO Ali Moiz in order to discuss all things GTM and Growth. Insatiably curious, Elaine is always churning out ideas for new companies on her wonderful, weekly newsletter, Three Things.

I’m a somewhat quirky, extremely high energy human that has shiny-object syndrome and a curiosity about most things I don’t understand. I uncover business opportunities everywhere as I go down rabbit holes and continue to dig in. This newsletter shares 3 business ideas each week including the “why now”, history of the space, how I’d think about building it, how you could monetize it, and any competitive landscape.

With an introduction like that, how could you not listen to her take on current market conditions and ideas for future billion-dollar opportunities on the latest episode of the Stonkcast?!

For the audiophiles out there, listen, subscribe, rate, et al (you know the drill people!) on either Spotify or Apple.

The ocularly-inclined can scroll down for some conversational highlights

(nota bene: The below conversation has been lightly edited for clarity and Stonkyness)

On Getting Her Start:

My path was definitely not linear. I always joke to people that some people have a North Star and they know exactly where they want to go and each thing is a step towards that.

I have a ton of interests as I'm a very curious human, but my path actually started as a mechanical engineer, of all things.

I did mechanical engineering for undergrad and grad school and thought I was going to build medical devices until I realized how unbelievably slow that industry is. Because I'm very impatient, it was not a good fit. So I decided to get into tech and do something more on the software side. I thought I wanted to start my own company, but didn't know exactly the idea I wanted to go build.

So I joined a software company as a second employee and spent about five years there building out a lot of the go-to-market teams.

I found that I loved being that connective tissue between the end customer, the market, and the product engineering teams. That was home for me for quite a while.

What Elaine Looks for in an Investment:

When I was first getting into the venture side, I went and talked to a bunch of GPs who had been in the game for twenty-plus years and had specifically focused on seed rounds. I asked these questions:

The number one thing everyone came back to me and said is it was about the founder. All of the most successful companies had an unbelievable founder who was just so driven, so gritty, and had shown perseverance in his/her life before. Even if the end product looked nothing like the original investment thesis, the founders were the ones who would really make or break the company.

Oftentimes, people get caught up in their own bias. They're looking for X and they see somebody giving them the pitch of X and invest, even though the team or product isn't there.

For me, it's really about the team. I am also looking for speed. Speed of learning, speed of approachability, and speed of execution in general.

I always joke to people that round sizes have really shifted in terms of what is a pre-seed, a seed, and a series A. There are no clear benchmarks. I think for series A, I blame VC because we've kind of anchored founders around this idea of 1 million ARR for anything that's recurring revenue, which I don't necessarily think is true anymore.

That said, for me a true seed company is founders who have some early, early, early form of an MVP product that has somebody using it. I don't even need to see people paying for it, but I do need some users on the other end who can articulate clearly, ‘I had this pain point. This thing is solving my pain point and I'm using it and here's where I want to see it go.’ That's enough for me to be able to extrapolate out.

Also, I look for that kind of stuff in markets that are growing, not shrinking. That's the last piece: is if it's even a big market today, is it a shrinking market? Because as a seed investor, I'm looking to figure out where the puck is going in five to ten years Is that market going to be half the size that it is today? If so, that's probably not the best seed investment.

On Startups as a Shit Show:

Every startup is a shit show all the time.

I will add what I always tell the founders: "I know you think that everything looks rosy for all these companies because they're tweeting about everything going perfectly, or you're only seeing the positives in TechCrunch, but know that every company is a shit show all the time."

That's the nature of building companies. It's not only the hard part, but also the beautiful part. Having the wherewithal to weather the storms, to relish in the good times, but also not get caught up in the bad times or worship sacred cows.

That speed of learning and quick excecution/iteration leads to outsized outcomes.

On Her Newsletter, Three Things:

I love talking to founders when they're at the ideation stage and trying to crystallize what they're building (and why!). The questions...

...all led me to start writing my weekly newsletter.

Deals are absolutely still getting done. It's not that everything is at a standstill or paused, things have just changed. The best motivator for investors in this market is traction: both revenue traction and also momentum. Put simply, I want to see a "pull" from the market.

I think there's also this interesting space where a series A is typically on the cusp of product market fit—I somewhat hate that term, but I do feel like it's useful archetype.

For instance, I recently caught up with some founders who I had met during their seed round. Now they're at that pre Series A stage after having pivoted and are seeing way more users than they can possibly serve. In that conversation, we were joking because a lot of people say that regarding product market fit: you know it when you see it.

When you have that pull where you're like, "We don't have enough time or bandwidth or ability to serve this demand," that is true product market fit. I think that is now getting pushed a little bit more towards a series B and so an A is this weird, amorphous area where it totally depends on what sector and who you're competing with in terms of benchmarks and whatnot.

Today's market depends on your sector. It's not just that, though; it's also:

In light of all that, it's key to just stick with it and work through all difficulties. That seems to be the characteristic consistent with the most successful founders. I don't know about you, Ali, but I think that that's the toughest thing: getting through the tough times.

#19 | Michael Devellano — Automating Growth, Building with Community, and the Need for Grit on Apple or Spotify