Due to the seemingly inevitable march of globalization, our world is more interconnected today than it ever was before. Ironically, despite this growing overlap, inter-regional correlation rarely follows. That is, startup and venture capital conditions in one market seldom (if ever) correlate directly to the conditions in another. A wide variety of factors — whether currencies, climates, commerce, or disparate socioeconomic conditions — generate a myriad of diverse environments for local startups and investors.

Given this wide spectrum, where should investors and startups lean in?

In this post, Stonks’ resident Data Whiz Kai Graham helps us parse through things to understand why.

In Q2’22, there were 97 new unicorns birthed globally, with fintech companies representing more than a third. The Americas accounted for over half of the world’s new unicorns, with the US hosting all but three in Latin America (Unico and Stark Bank in Brazil and Kushki in Ecuador). Europe saw 18 new unicorns come from 8 different countries (UK, Germany, Finland, Sweden, Norway, Netherlands, Switzerland, Israel), reflecting the incredible geographic diversity of the European VC market. Asia also saw quite a geographic spread of new unicorns, with 17 coming from seven jurisdictions in Q2’22.

European venture-capital investment lost less ground than the U.S. and Asia in the second quarter as deals everywhere took a nose dive in the wake of surging inflation, higher interest rates and macroeconomic uncertainty…Funding for European startups dropped by 13% in the second quarter from the first three months of the year, compared with a 25% quarter-to-quarter drop in both the US and Asia.

Local market conditions will undoubtedly continue to fluctuate. By targeting markets with sizable momentum at a given funding stage or within a particular vertical, both startups and their investors can gain a true edge.

For example, TechCrunch recently analyzed African startup valuation trends and found more robust tailwinds out of Kenya than any other country on the continent:

Kenyan startups raised nearly one billion dollars in the first half of 2022, surpassing what the country secured last year. Data shows that, of the big four in Africa — the quartet that includes Nigeria, Egypt and South Africa, and which receives most VC funding in the continent — Kenya has so far showed the greatest growth in funding gained this year.

In light of such trends, it would behoove investors and partners to continue to hone in and target these booming locations.

What’s YC Got to Do with It?

Take a look at their cohorts’ respective makeup over the past few years: 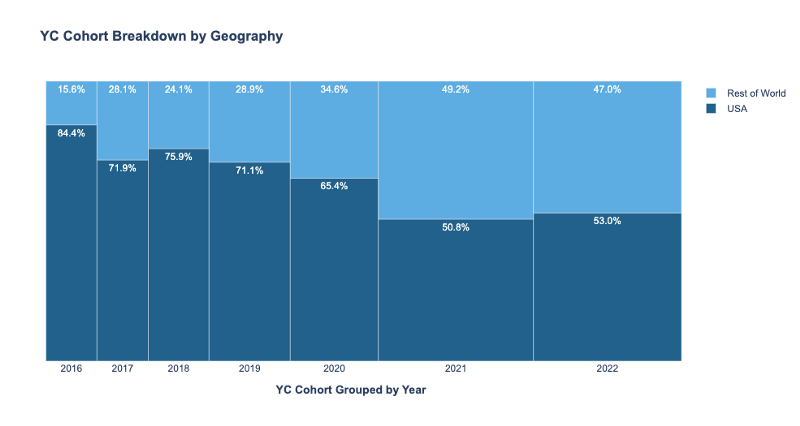 Despite this summer’s smaller cohort, YC continues to maintain a macroscopic focus on international startups.

Unpacking this data further, we can divine the types of businesses YC targets in respective regions. Using natural language processing, we can plot the most common company descriptors from each region:

Parsing through the top ten most common words in each region’s startup descriptions shows clear differences:

While only a preliminary high-level analysis, the above provides a directional sense of where investors and startups are investing spending their time and investing their capital. Given the patterns emerging across different regions, YC continues to strike where the iron — and industry/vertical tailwinds — is hot globally.

This behavior makes perfect sense in light of the disparate under / outperformance across geographies, industries, verticals, and markets.

International opportunities remain vast for those brave few willing to expand beyond local borders and limited markets. Put simply, it’s what the “Smart Money” is doing. Data shows that larger market participants such as QED have shifted their focus more on markets outside the US in recent years.

Given this international opportunity, deal flow and demand from the world remain incredibly robust on Stonks.

It’s said that capital is limited while opportunity is not.

Given the firehouse of international deal flow across regions and industries, how can investors allocate capital to these fast-growing startups?

Though we’re biased, Stonks is a great place to start.

Below highlights the breakdown of Stonks startup pitches since January of this year: 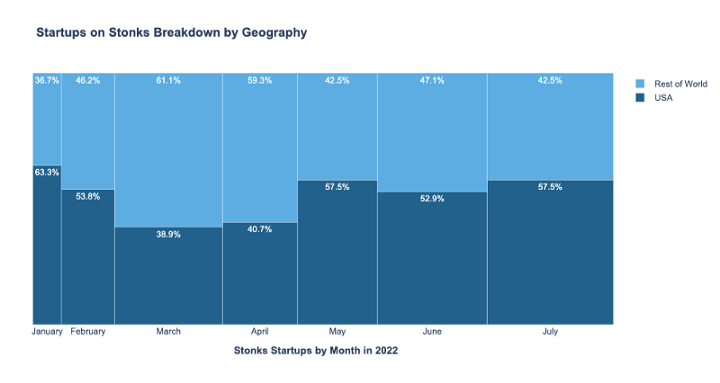 As can be seen, startups located outside of the United States have represented close to 40% of all pitching companies at minimum. This diversity of deals allows investors to fund companies far and wide in order to increase the odds of outperformance.

Investors Don’t Have All the Fun: Introductions and Partnerships on Stonks

Investors aren’t the only ones who can benefit from the eclectic mix of opportunities available on Stonks. Startups and partners eager to tap new sources of capital or customers can readily benefit from our active, global investor base.

Looking at the average number of introduction requests and investment interest generated by startups on Stonks, we see strong performance across all regions:

Despite standouts from regions like Australia/New Zealand, Latin America, and the US/Canada, we see strong performance from startups located all around the globe.

Now more than ever, exposure and allocation to countercyclical assets like early-stage startup equities allow for proper diversification and potential outperformance.