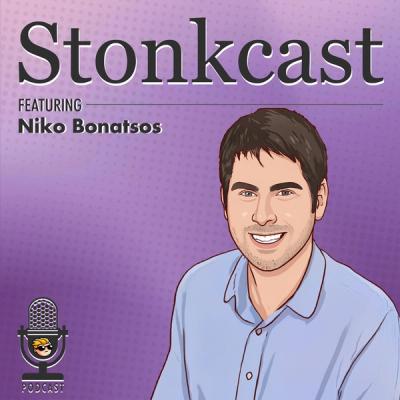 Listening to Niko Bonatsos discuss venture investing is like watching Michael Jordan shoot a basketball: it's both effortless and awe-inspiring.

This episode of the Stonkcast features the prolific investor in his element, discussing a wide array of topics from investing for the Gen Z audience to the basic decision-making process at General Catalyst. It’s not often you hear an OG VC like Niko pack nugget after nugget of wisdom into a quick thirty minutes. Don't miss his conversation with Stonks CEO Ali Moiz.

For the audiophiles out there, listen, subscribe, rate, et al (you know the drill people) on either Spotify or Apple.

The ocularly inclined can scroll down for some conversational highlights.

Nota bene: The below conversation has been lightly edited for clarity and Stonkyness.

The face of the Internet today was largely designed and built by geriatric millennials like the founders of Instagram, Tinder, Facebook, WhatsApp, and Discord. The list can go on and on for folks who are in their low thirties to early forties age group, and now Gen Zers have landed on this planet like aliens.

All of them live in the future in their heads, but the technical ones can actually build it and bring to life. If you're an 18-year-old person today, you grew up in a very different setup. First off, your entire life that you can remember you most likely had a smartphone since you were a very young person so that you could socialize with others.

In addition to that, online you grew up initially playing Minecraft, then graduating to Roblox, and finally graduating to Fortnite. And in all these games, you can express yourself. In Fortnite, for example, you can flirt with others, hang out with your friends, and watch shows and experiences put together by notable artists. You can do your homework if you want. You can just hang in there.

If you graduate to the serious millennial-designed face of Internet products, you're like, ‘Oh my God.’ You know, first off, millennials are so vain. Vanity has no ceiling. They want to show off nonstop. Secondly, these are single-use case kinds of products. You can only do one thing. Instagram is a massive stream of your life’s best experiences.

Whereas, the products that I described before like Fortnite, you can do so many different things. So I do expect, as a result, the technical engineers will challenge the very foundations of the face of the Internet as we know it today. So since the summer of 2021, I've been spending all my time trying to understand [Gen Z] and dream about what's possible.

It's really hard to create new consumer-facing products that will become mainstream, but some of them will happen. And the big incumbents, as we know them today, they're vulnerable. They've lost the trust of the young consumers in particular.

Crypto’s Fit in The Future:

Look, I'm open-minded for all things that technical Gen Z founders are obsessed with. I would say still, even today as of November 2022, about like a quarter of the technical Gen Z founders I have met with are crypto-curious or infected with the crypto brain virus. And if indeed they have a customer in mind from day one, we would be willing to consider them seriously and make investments as we have before.

The really nerdy ones are frantically obsessed with improving their productivity as programmers, so they're building dev tools for themselves. So that's the other thing we're looking for. Yes, you need to be technical, but we also want you to be building a product for yourself because you have a customer's intuition and you don't need to get out of the building to have people build a network of this hard stuff that normally comes with age.

If you're a nerdy Gen Z and you're building dev tools for yourself, great. I'd be thrilled to learn more.

Basics of Decision-Making at General Catalyst:

We need to have a couple of internally-perceived domain expert partners really excited about founders, hopes, and dreams. We are not making decisions based on consensus, but we do make decisions on the back of a couple of individuals who are equally enthused about a specific opportunity. Assuming they can make the case to the various investment committees, depending on the stage of the company.

But it all starts with two partners.

They are internally perceived as domain experts for that specific theme and there would need to be variances. If everybody else hates it, those two can really make the call, if they really, really wanted. The most interesting investments we've made over the years have been very controversial. So we're very aware of that.

What is Niko Seeing:

We're all learning as we go, right? We're market participants and new data presents itself every single day. I would say for your Pre-Seed, you're still in a pretty good spot. There are so many fans out there that are eager to write checks and give you the benefit of the doubt, especially if your story and your founder narrative fit. They seem to be in a good place.

For the seed to market, this is where things have slowed down dramatically compared to before. A lot of fans are less eager to give people a second chance. There are fewer firms that want to be co-investing with famous people or notable funds as there were before. A lot of angels have pulled back because their equity portfolios, public or private, are not as valued as they were last year.

So the seed to market is harder. In other words, raise enough money in your seed or pre-seed and make sure that you make enough progress so that you earn the right to raise the next round. This is how it used to be for a long time till we found ourselves in this situation and especially in 2021. Companies were raising two or three or four rounds and most of them deserve to actually shut down months earlier. For Series A, the hurdle is much higher.

If you talk to a lot of our peers, they're trying to concentrate on the number of relationships they have with funds and LPs. This means that it's going to be harder for both existing or newer funds to get the dollars that they were hoping for exits or far fewer than what they were before. So unless something changes dramatically, I don't see a reason to believe why the number of new funds or the amount of capital that VC firms raise is going to dramatically go up.

And then, of course, you know, for those of us who have portfolios, there's something to be said about trying to do the best for the existing children that you have. Not everyone deserves to be saved or receive a lot of new dollars. But for some of this capital that has been raised, it sounds pretty high in terms of absolute dollar amounts that will have to be spent in supporting the existing portfolio.

Also, don't forget that you're talking about the dry powder that was raised over the last 16 months. But the bulk of the rest, I would argue, has been invested or spoken for because of 2020 and 2021 events. For many people, the first half of 2022 was, a ‘we make one investment a month or one investment of nothing’ kind of situation.

But these are crazy times.

#19 | Michael Devellano — Automating Growth, Building with Community, and the Need for Grit on Apple or Spotify