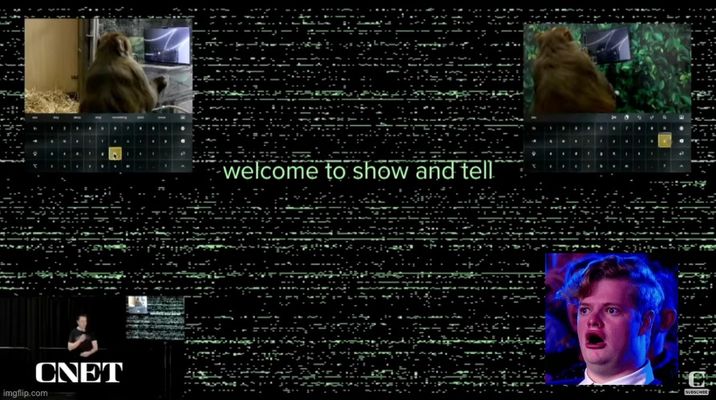 Neuralink demo days are insane. Doing my best to not get called an Elon fanboy here, but I think it's objectively pretty amazing and worth knowing about. So below are takeaways from the 3 hour presentation and as concise of a writeup as I can muster:

The demo happened yesterday (November 30th, 2022) at 6PM PST and was streamed live on the Neuralink website. You can watch the full recording here.

The stated goal of the demo (as it has been in the past) was not showing the general public the cool stuff they're working on, but actually to recruit new team members. I personally love this approach and think more companies should use this strategy. If you want to check out the careers at Neuralink, click here.

The presentation was broken into three main parts:

Before the long-form breakdown, here are some TL;DR bullets:

We recently launched Secondaries on Stonks to invest in companies like Neuralink. If you think this is awesome and might want to invest, give it a look here.

Ok, now for some long-form stuff. This isn't comprehensive (you should watch the video if that's what you're looking for), but I'll give some thoughts on what I found most noteworthy:

To start - Elon presented Neuralink's long term vision. The basic idea is that at some point there's going to be digital super intelligence (think sci-fi type AI) that's much smarter than humans and our brains won't be able to keep up with them. If we want be able to compete or at least "go along for the ride" - as Elon put it - we're going to need to expand the bandwidth of the brain. Neuralink wants to help with that.

Best way I can think about that is as an extension of the famous Steve Jobs "bicycles of the mind" bit. Worth a watch if you've never seen it. To rush through an explanation: Jobs points out how humans are normally slow, but on a bike we're very fast. He compares this to what computers do for the brain. Computers allow the brain to move faster, produce more, etc.

Neuralink proposes: What if - in this computer/bike situation - we got rid of the constraint of our "legs" only being able to move so fast?

We could sit on the "bike", take our feet off pedals, and still get where we wanted to go - only faster. Taking the physical constraint away and leaving us to simply point it in whichever direction we want to go and go as fast as our brain allows. (Please don't get caught up in the "how do we move if there's no pedaling" part. This "bike" moves as fast as our brain tells it to.)

Much simpler example: What if you could type as fast as you think?

The general idea is that if we allow our brains to interface directly with computers it could get exciting in the long term in a lot of ways. Will leave you to imagine the possibilities.

After the really broad vision discussion though, Elon hands it off to the Neuralink team to talk through what they're working on today and how this can be applied in the near future.

The first thing they will look to do is use the Neuralink device to REPAIR connections from the brain to the rest of the body rather than IMPROVE connections. This is an important distinction when we think about the first human trials. They're not looking to pull a random person off the street who wants to be a cyborg. They're hoping to use the first versions of this technology to help people who don't have full functioning connections between their brain and other parts of their body.

The examples the plan to focus on to start are blindness and paralysis. There are a bunch of details I'm going to skip over here, but here are the basics of each:

Neuralink plans to allow people who can't see for whatever reason (accident, disease, etc.) to regain their sight by basically plugging a camera into the brain. The camera will pull in visual data to then communicate the image directly to the part of the brain responsible for processing that type of information. They demo'd the ability to have a monkey "see" stimuli they created. I literally clapped alone at my computer when I first saw it.

The second goal is to restore motor function for paralyzed people with a specific focus on spinal cord injuries. This is even bolder than the blindness use case because of the information being passed from the brain to the rest of the body. In the blindness situation, we're taking data from the outside world and bringing it to the brain. In the paralysis use case, the device is taking information from the brain, understanding what it's supposed to mean movement wise, sending it to the muscles to create the movement, and then taking the information from the muscle movement and sending it back to the brain so that the person can actually feel what's happening. Rather than feeling like you're moving a numb limb.

If you've read Ready Player Two you know where this story goes. Here's a post that discusses what I mean by that.

Outside of the two big use cases they spoke about at the demo day, the other themes were around production and installation.

Elon stated early in the presentation that the hard part is actually making a lot of these. He notes that compared to creating a prototype, it's 100x harder to create something like this at scale. Demos are fun, but getting those results to thousands or even millions of people is a the real test.

Within production, this means making thousands of the "N1" devices and making sure they all work. He compares this to perfecting the manufacturing process for something like an Apple Watch - except that this gets implanted in your skull. So you could say the stakes are higher.

On the "installation" side - which I understand is an odd word to use considering the procedure - it's about creating systems like their "R1" robot to make the actual process of getting one of these devices attached to a brain efficient and replicable. If it takes 10 hours and a highly-trained neurosurgeon to get one of these things, nobody is ever going to have one.

The biggest thing to point out there is their focus on speed of iteration. They talked about strategies they're using to improve the production and installation processes, but what they actually talked more about is what they were doing to increase their speed of creating and testing new strategies. For example, they talked about how it used to take them 2-3 days to design and test a specific type of needle that's important to the installation procedure. That same design and testing process now takes them less than an hour.

Finally, I'll touch on is some of the stuff that came up in the Q+A section of the presentation. Here are some highlights from the answers:

The ending note from Elon was how much more we can learn about the brain if Neuralink is able to scale. If hundreds, thousands, or even millions of people are hooked up to these devices there will be unprecedented access to brain data that should allow us to know exponentially more about the brain than we do today.

Ok that's it. Probably my longest post ever and I hope it was helpful! If you liked it, please tell you friends :)

If you didn't like it, don't tell your friends... but please tell me so I can get better.