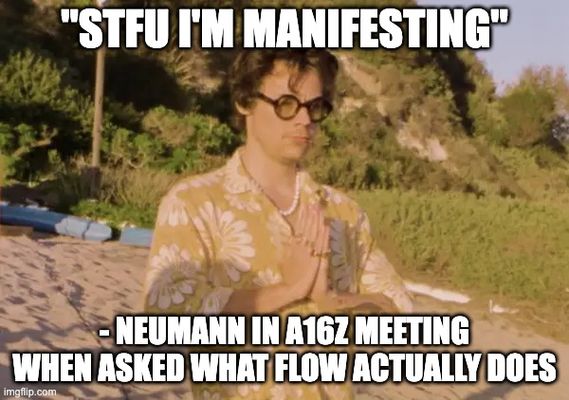 Let me start off by saying that raising $350M for a real estate startup, like Adam Neumann's Flow, is not the same as raising $350M for a software startup. The people that write these "Holy shit look at how much he raised!" headlines know that (or at they least should), but it's typically not really worth explaining because it makes the whole thing less exciting. So why is raising $350M different for real estate compared to software and other venture businesses?

For software, or just a more high-risk technology startup generally, you're giving people money to make something that may or not have any value in the future. That money is mostly going to be burned to pay the people who are building it and hopefully they produce something people want. If you pump $350M into an app and then release it and nobody wants it, you're left with ~$0 and an app that nobody wants which is definitely a bit reckless (shoutout Quibi).

I'm no tycoon, but my bet is that the vast majority of that $350M is going to be used to buy up real estate assets. Unlike apps nobody wants, these real estate assets are exactly what you'd expect from their name: Assets. They have value before you buy them that might go up or down after you buy them, but the chances of them going to absolute zero are highly unlikely (knock-on-wood). The unlikelihood of them going to zero is why banks lend money to people to buy real estate and they don't lend money to people to build iPhone apps.

So, the $350M number is fun and fancy, but in the buying up real estate game it's actually not that crazy. To put it in context, in Q4 of 2021 *alone* institutional investors spent ~$50B to buy up ~80K homes. Just wait until the headline hits of how much money Flow is spending when Neumann levers up...

To the other side of the headline: "I watched WeCrashed and it seems like Neumann is a bad person. Why are investors trusting him again?"

This is a tough one. The easy answer is outrage: "He should never be trusted again!", "The audacity!", "What is Andreessen thinking!?"

The more nuanced and unemotional reality is that Neumann could be a good bet to win this market despite his questionable ethics. It's definitely a risk factor in the equation - he could make a mess of it and put investor money in his own pocket - but there aren't a lot of founders that have built a multi-billion-dollar movements in the real estate space. If you take out the moral complexities, is Neumann not a good fit to solve this problem?

Marc Andreessen seems to think so. A lot of people on Twitter seem to think otherwise. This might just be what a contrarian investment looks like: low in high-fives and high in ridicule. Or Marc just got played in a big way. Time will tell.