Juul gets the boot 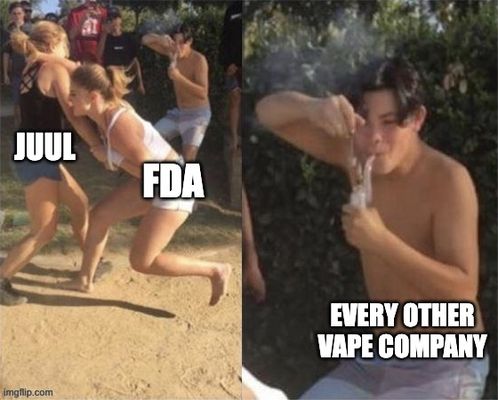 In 2005, Adam Bowen and James Monsees met at Stanford where they were both graduate students. They went on to start a company named Ploom, which after a series of successes and name changes would ultimately lead them to create the vaping phenomenon that was Juul in 2015.

Fast forward 3 years to 2018 and Juul is having a busy year:

But then, after an official government investigation in 2019, Juul was found to be in violation of marketing rules related to how healthy they advertised themselves to be. Their valuation began to tumble: Altria cut Juul's valuation to ~$10B in 2020, $4.3B in 2021, and most recently to $1.6B in March of 2022.

Earlier this week, the WSJ reported that the FDA is planning to order Juul to take its e-cigarettes off the U.S. market completely. This comes as a surprise to industry observers who had expected Juul to fall under the same rules as competitors like Reynolds American Inc. (Vuse) and NJOY Holding Inc. who have simply been barred from selling "sweet and fruity" vape cartridges.

Juul could pursue an appeal through the FDA, challenge the decision in court or file a revised application for its products, but after a $259M net loss and 11% decline in sales last year, this once prized Unicorn may be on its last legs. To anyone not following the vaping industry closely (me), this could look like it's coming out of nowhere, but it's actually the result of an almost two-year process that Juul went through with the FDA in hopes of receiving authorization to continue to sell in the U.S. market.

As I walk into my local convenience store and see at least 10 different fruity vape options this all seems a bit silly. With so many available and other brands like Puff Bar and Vuse being more popular than Juul among teens it's hard to see this as anything other than an awkwardly delayed display of power. Unless this decision results in some clear new guidelines from the FDA around what is and isn't allowed when marketing e-cigarettes I don't really see the point.

With a story arc like this though, I have my fingers crossed for a WeCrashed style miniseries.