Is the SEC Coming after VC? 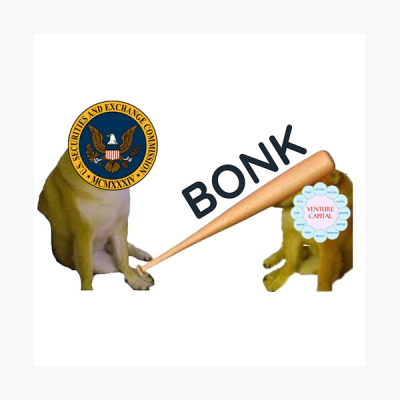 There are only a few certainties in life: Death, Taxes, and Government Overreach.

Yes, you read that right.

Per a recent Politico writeup:

"[T]he venture capital industry is sweating new regulations that could expose fund managers to legal risks.
The SEC is putting the final touches on a rule that would make it easier for investors to sue VCs for bad behavior, negligence or recklessness...Of course, the rule wouldn’t just apply to venture capitalists. It would also cover private equity firms, hedge funds and certain real estate investment companies – any private investment fund that’s already subject to SEC oversight. But the proposed changes might be especially vexing for VCs because of their investment model. Most venture-backed companies fail. And while the vast majority of those businesses peter out because they can’t attract a buyer (or make beaucoup bucks via public markets like Facebook or Google), a handful will go under because their founders are either frauds or comically inept."

In light of the FTX Fiasco, VCs are now in the hot seat because of their purported failure to conduct proper due diligence. As Dan Primack wrote, "The SEC is working on a rule that would eliminate private funds from seeking indemnification for simple negligence, effectively making it easier for limited partners to sue."

While I'm all for holding negligent/incompetent actors accountable, an increase in litigation is never the answer. As Sebastian Mallaby alludes in his recent work, the VC asset class follows a power law distribution: a small % of companies account for a large % of venture returns.

Put simply, most venture investments are bad. That's just the nature of the business.

Though VC might have its very own Dodd-Frank or Sarbanes-Oxley waiting in the wings, the SEC's efforts thus far seem both clumsy and short-sighted. The government body means well, but such action would likely increase the cost of operating a VC firm and in turn harm both innovation and investor returns.

What do you think? Has the Goliath that is VC met its David or is this much ado about nothing? Let us know by joining the conversation on Twitter.