How much capital does Y Combinator deploy?

YCombinator started in 2005, and has been used to launch over 3000 startups, which were collectively valued at over $300 billion as of Jan’21. Some well-known ones include Stripe, Airbnb, Coinbase, Instacart, Doordash, Dropbox and Reddit.

How does YC make money? How much capital do they deploy annually?

I was curious, so thought it would be fun to do a deep-dive.

I should caveat this by saying these are based on publicly-available numbers. We don’t know:

We do believe however that these numbers are ballpark-accurate for YC’s early-stage accelerator.

🙏 Shoutouts to Jonathan Golden (Partner, NEA), James Beshara (Tilt, Airbnb, active angel in 50+) for feedback and comments in putting this together. Give them a follow. If these numbers could be improved in anyway, feel free to write a comment letting me know, and we will update with the wisdom of the crowd.

The ~3000 startup total is a ballpark, but we can use that to estimate YC’s first 16 years. For purposes of simplicity, we’ll assume a linear rate of 3000 startups over those 16 years. 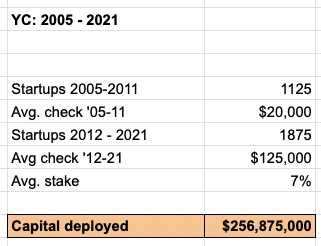 This gets us to ~$256 million deployed capital over 16 years.

By all accounts, 2008–2015 were great vintage years for VC. Funds deployed during that period have seen tremendous returns. We can safely assume that the carry proceeds from this deployed capital were in excess of the management fees charged over this period ($120m+).

Assuming this capital returned in the 3x — 5x DPI range (a top 5% fund, which we’d expect with YC), we can estimate total returns to YC:

Not too shabby at all 🤔

In January 2022, YC announced their new deal — $500K for startups, up from $125K previously. This was in response to liquidity flooding the ecosystem, and competitive pressures from early-stage funds and other accelerators.

Their new deal still takes a guaranteed 7%, but also adds an extra $375k towards the next round, helping to accelerate a startup’s fundraising process.

Their batch sizes, which had been creeping up over the years, also increased tremendously. YC now does 2 batches of approximately ~400 startups each per year. 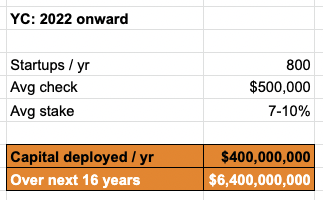 This is a 10X, order-of-magnitude change. YC will deploy more capital this year, than the last 16 years put together 🤯 🤯 🤯

If we assume startup investing won’t disappear, and YC will continue to run these large batch sizes, then YC’s total revenues can be extrapolated over the next 16 years:

YC’s new deal has allowed them to support many more startups than was possible previously. This is net good and hugely positive for startups and the world, particularly since there is capacity now to support more startups from around the world (over half the recent batch was international).

But looking at the numbers, we can see that this was great for YC as well, a 24X growth in the top-line for the accelerator 🚀

This means that in addition to being one of the best-performing funds of all time, YCombinator is also now pulling in revenues & fees in the same order of magnitude as some of the largest private funds out there — Tiger, Blackrock, Insight, Coatue, Sequoia, a16z etc.

Let that sink in. It’s a brave new world out there.