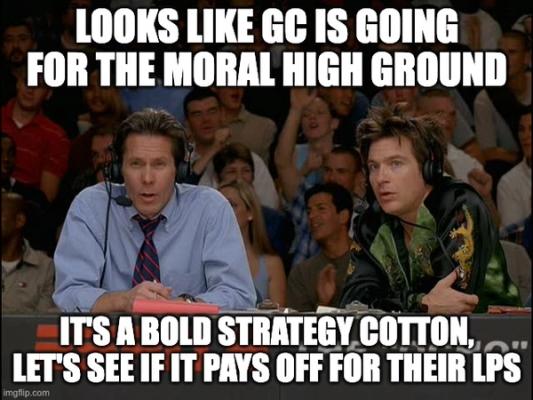 Hemant Teneja, CEO and Managing Director of General Catalyst, put out his year end letter to LPs. In it, he calls for a "doubling down on the principals of Responsible Innovation" and advocates for 9 "reframes" within the VC industry. Here's the full letter here are the 9 "reframes" he proposes:

1. From celebrating disruption to embracing ‘radical collaboration’ (committing to working with innovation-minded leaders within the industries we’re actively trying to transform)

2. From pure serendipity to greater intentionality (leaning into the power of a prepared mind; having a clear point of view and thesis on how the world is changing and how it needs to change–and working to advance that thesis through thoughtful strategic investments)

3. From elitism to inclusive opportunity (acknowledging that our industry has contributed to the consolidation of wealth and power among a select few and by committing to create inclusive opportunity as part of a fairer and more sustainable society; always asking the question: ”who wins and who loses?”)

4. From just backing or even building companies to transforming industries and society (taking a broader perspective on the large scale changes we’re trying to affect)

5. From ‘exit’ as the sole endgame to building enduring enterprises that also create liquidity for investors (truly acting in service of building enduring, compounding businesses that stand the test of time)

7. From ‘ESG’ (focused on corporate outputs) to responsible innovation (focused on a new set of inputs–purpose built for the venture space–at all stages of company building)

8. From a ‘cult of personality’ to a ‘cult of purpose’ (abandoning the egoic worship of the individual investor or founder in favor of a sense of shared purpose and outcomes)

9. From investment partnership to cohesive company (where team, mission and culture really matter and we become enduring businesses in our own right)

We recently launched Secondaries on Stonks! Check it out here.

I think an easy first take is that he pushes a bit of a god-complex for VCs here. He actually recognizes how this could all be seen as the "privilege of someone who has already enjoyed success and now has the luxury to consider impact and legacy" - which softens the blow a bit, but doesn't change what was said.

A quote that comes to mind here is Charlie Munger's "Show me the incentives and I'll show you the outcome."

Underneath this rhetoric are the simple economic structures of a fund. VCs are incentivized to return as much capital as possible to LPs. To my knowledge, GC has not changed their structure and in this letter Hemant does not call for any changes of that kind.

Hemant briefly mentions that their commitment to these principles have allowed them to pull together "exceptional and diverse talents outside our own investment team" - but the main argument for these changes are much more moral. He uses the word "responsible" a lot and points to the FTX situation as an example of "new technology frontiers exploited with little governance."

So who should govern these new technologies? VCs?

I have a deep respect for General Catalyst and the institution they've built, but if I was an LP I'm not sure I'd love reading this. As a private market investor - and as an investor in general - it seems that success most often finds the focused and humble.

As you saw in last weeks post, I favor a "focus on what you're good at" USV approach and would push the same to anyone who asks. As far as actual change goes, I think that anything less than structural economic incentive shifts are just words and I also wrote about how OpenAI put their money where their mouth is in this regard which does show that it's possible.

In a turbulent time like this I'm surprised to see a Letter to LPs that's anything besides "we're doubling down on what we're good at" and don't expect 2023 to be the start of a responsible renaissance in VC as much as a time to get back to basics.

Other Stonky stuff to be aware of: