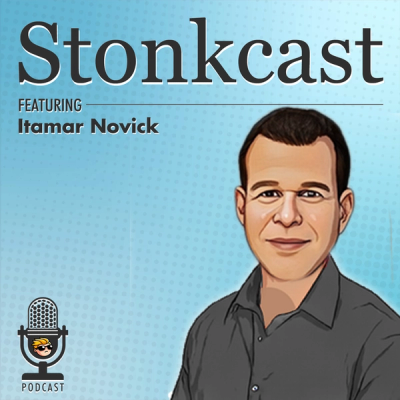 Itamar Novick is the epitome of a Renaissance man.

Founder and Solo Capitalist of Micro VC fund Recursive Ventures, this veteran of venture has some rather radical thoughts on the current state of the market. Any and all early-stage investors would do well to listen closely to his cogent, yet contrarian, opinions. After all, his investment record speaks for itself:

In this episode, Stonks CEO Ali Moiz converses with Itamar about the “good old days” of venture, the accelerating momentum behind solo investors, and the utility of pivots both in founding and funding.

For the audiophiles out there, listen, subscribe, rate, et al (you know the drill, people) on either Spotify or Apple.

The more ocularly-inclined can scroll down for some conversational highlights (nota bene: The below conversation has been lightly edited for clarity and stonkyness).

On Alpha versus Beta in Investing

From my perspective—that is, someone focused more on early-stage investing—alpha is potentially more consistent. One of the things that leads me to think that way is the consistent pace with which innovative and disruptive companies are created regardless of whether the economy is in a boom or a bust. Because of this, if you’re a great entrepreneur with an awesome team pursuing a viable, marketable idea, you’re going to found your company regardless of market conditions; whether it’s 1999 and everybody is celebrating bonkers IPOs or it’s a down cycle like we have today.

The beta, on the other hand, is very much impacted by cyclicality. Whether you exit your company when public market comparables are 10x [revenue] or 50x [revenue] for a given company/vertical is going to make a HUGE difference in the returns you’ll see on your investment—whether as entrepreneur investing time and sweat equity or as VC investing capital.

We’re in a unique moment in venture right now. We’re seeing solo capitalists compete head-to-head with venture firms across the entire lifecycle of startup funding. I came across an interesting stat from our friends over at AngelList. They put out a nice chart showing that the top twenty co-investors by markup over baseline are angels. Though just a sample of all deals out there, this is an interesting indicator. Additionally, in Q3 of 2021, eight out of the twenty leading co-investors with market markups were solo capitalists, not these more traditional firms. This sea change is being led by individual people like me who are building from the bottom up and fighting in the trenches with founders at the earliest stages.

On His Investment Process

Every fund should have either narratives or theses that help drive its investment process. At my fund, Recursive Ventures, I focus on leveraging data and machine learning capabilities to disrupt markets like financial services, insurance, and real estate. Those particular verticals have a tremendous amount of upside in terms of operational efficiencies and improvement. That’s the main recurring theme in my investments. But, at the same time, I have another significant bucket that I call the “Generous Bucket.” This pool of capital is earmarked to follow brilliant entrepreneurs into the “right adventure,” even if I don’t know enough about the problem, space, or vertical in which they’re building.

I know that I am not an expert. I feel as a VC, and especially as a solo capitalist, I have to trust my founders. They’ve done the research and they know their space much better than VCs, which is why I’m always open to new ideas in terms of process. This is unique, but it’s my personal modus operandi.

On the Value of Pivots

I’m a strong believer in pivots. Pivots are great because they mean you’ve learned something and now understand that your original plan is not as good. The startups that thrive, the startups that are sustainable are the ones that constantly learn. It’s no more than a journey inside the founder’s head of how quickly they can get from where they are today to knowing everything necessary to make their business successful. And part of that thinking, part of that journey could be:

“Oh gosh, my business model is wrong.” or…

“I’m targeting the same market but then targeting the wrong persona to sell to. I need to be selling to this type of customer, not this one.” or…

In startups, you see a combination of all these different things happening at the earliest stage, right? It’s this journey, and you’re trying to internalize and lock in all of these insights in order to find what works. That’s what I firmly believe and it’s where I focus my diligence.

On His Market Forecast

I have a bit of a contrarian view. We’re definitely in a recession, even more so with late-stage venture and public technology companies. But I think that we were in an even bigger bubble two or three years ago. And I think everybody in the ecosystem felt it in our hearts. We knew that, “Hey, this is a great company, company X, but to be worth $10 billion…where’s the justification for that?” Unfortunately, the bigger the bubble, the bigger the downfall. I think we’re seeing some of that now happening. But in a way, this is not bad, merely recalibration.

I started my venture career in 2010. It was a completely different environment than what we saw in the last few years. To give you a sense, great SaaS companies with $3 or $4 million ARR would get a $5 to $7 million investment and a $20 million valuation.

I think we all know—if we’re being honest—that the right balance is a little bit lower than what it was in the last few years.

Can’t get enough of Itamar? Neither can we! Check out his recent blog post on early-stage venture capital’s outperformance during recessions!