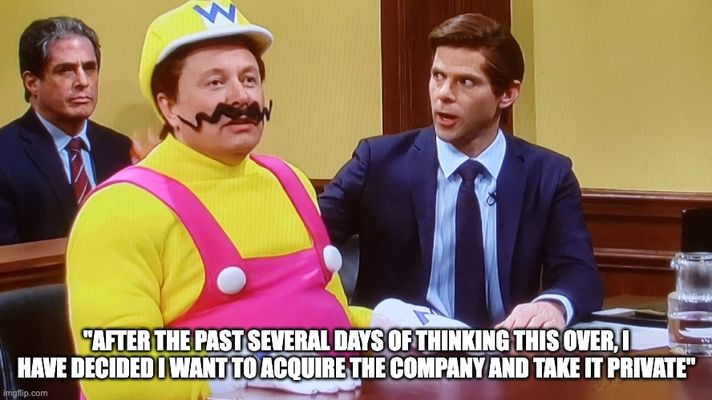 The last few weeks have been an absolute roller coaster for the Twitter-Musk relationship. A quick breakdown to get you up to speed:

Exciting stuff all around. Whether you’re an Elon fan or not, this is definitely good content and worth following over the next few weeks. Below I’ll break down some key questions and answers to be aware of heading into the big show:

What happens now that he sent the offer?Twitter will “carefully review the proposal to determine the course of action that it believes is in the best interest of the company and all Twitter stockholders.” They have a responsibility to shareholders to consider the offer and will shop it around a bit to see if anyone else is interested. At this point though it doesn’t seem like any other big buyers are going to swoop in.

What are the chances this happens?In classic Elon fashion, there’s actually a pretty decent chance this happens despite it sounding ridiculous. The price he offered ($54.10/share) is 54% above where it was trading before he announced his plans (it went up since then) and according to people much smarter than me that price is very fair. $54 per share would also represent a nice profit for big holders like Vanguard, Morgan Stanley, and BlackRock who represent 24.8% of voting power.

Where is Elon going to find $43B?Although he technically could, Elon’s comments suggest that he wouldn’t pay for the whole thing out of his own pocket. He has mentioned “anticipated financing” which leads us to believe he will seek outside capital. That being the case, we’re excited to announce that Elon will be raising $43B on Stonks in the largest live raise in the history of the world! Just kidding. More seriously, fundraising doesn’t seem like it will be an issue here because it’s Elon Musk.

What is Elon going to do with Twitter after he buys it?“I don’t have confidence in management.” Elon definitely hasn’t sugarcoated anything when it comes to his feelings about current leadership. If he manages to get this done, the first thing everyone expects is that he will start chopping heads in management and throughout the organization. Parag Agrawal, the Twitter engineer turned CEO, is suspected to be updating up his personal website and the same is likely true for much of what some call a bloated organization more worried about locally sourced kombucha than shipping product. Being overly harsh here for effect - a lot of great people work at Twitter… for now.

Click here to check out the full article from Martin Peers at The Information.