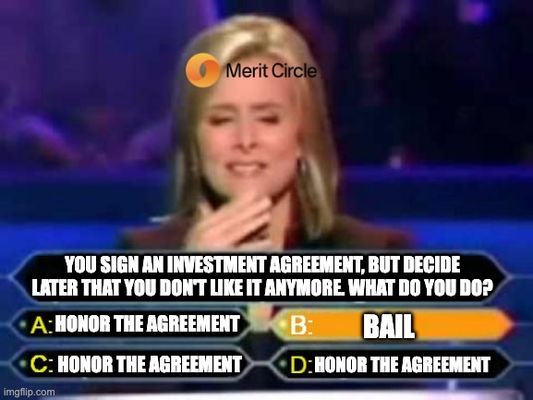 A DAO voted to back out of an investor agreement and it sets an unsettling precedent for similar types of investments going forward. Here are the basics:

As someone who is personally excited about the potential of decentralized solutions - this was disappointing to see. That being said, this was also bound to happen eventually and exposes some of the issues with DAOs. Part of the beauty of DAOs is that no one is in charge. A lot of the problems with DAOs spawn from the fact that... no one is in charge.

In this specific situation, there are no repercussions for the DAO member by the name of "Honey Barrel" that instigated this movement and wrote the proposal. Although they are technically tied to the success of the project through token ownership, they can always sell and walk away - leaving Merit Circle leadership and other holders to deal with the fallout.

With millions having been poured into DAOs by giants like Andreessen, Union Square Ventures, Sequoia, and Paradigm it's hard to imagine this won't add to the perceived risk of SAFT investments into DAOs going forward.

I first found out about this story through a thread by all-star web3 founder and friend of Stonks, Tim Connors. There was also a longer article written by Margaux MacColl of The Information.