Around the World with Stonky: Africa 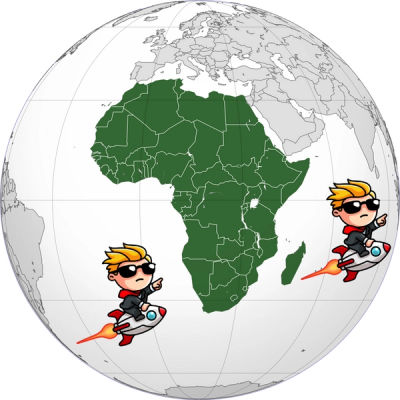 I’ll never forget the time that I first deplaned in Lagos.

Fresh off a nearly ten hour flight from New York’s JFK Airport, I groggily made my way through the humid hallways of Murtala Muhammed International Airport, weaving my way through a panoply of checkpoints: customs, immigration, baggage claim, and more.

The first thing that struck me was the heat and the humidity. I was a long way from New York’s gentle, mild spring.

The second was the people. The vivacious, energetic mass of young, vibrant, smiling, industrious people. This teeming, jubilant throng was everywhere, all at once, throughout the megacity of Lagos.

As native New Yorker, I was simultaneously shocked and appalled, surprised and right at home (aside from the horrific Lagotian traffic…NY's crowded streets cannot hold a candle to it). Like Marty McFly, I had gone back to the future and set foot in an ascendant place ready for its debut on the world’s stage.

As I traveled to two other cities on the continent—namely, Nairobi and Johannesburg—I felt the palpable energy and witnessed the exact same thing.

Though memory rarely serves, the data shows that my impressions were right. I mean, pick your report or source:

As we’ve written before, ​​”Demographics are destiny.”

Nowhere is this demographic sea change more staggering than in Africa. Two statistics stand apart from the rest:

According to the Pew Research Center, nearly 3 out of every 10 births worldwide last year took place in sub-Saharan Africa.

Additionally, the birth rate in sub-Saharan Africa is double the global average, at 4.6 births per woman.

Eunice is an executive with experience ranging from startup funding and management to leading a $10M+ tech startup. She has a track record of leading business organizations to profitable, market-winning positions in hyper-competitive environments. She founded Ajim Capital in order to invest in pre-seed and seed stage companies that focus on using technology to fill significant economic and infrastructure gaps for consumers and enterprises across Sub-Saharan Africa.

Africa's growth story is one of resilience, resourcefulness, and determination. Despite challenges such as a lack of infrastructure, the continent has experienced steady economic growth over the past decade. Indeed, six of the world's fastest-growing economies are in Africa.

This growth can be attributed to a combination of factors, like a young and growing population, ongoing tech adoption, rapid digitalization, and a growing middle class with increasing purchasing power. These trends attract foreign investment, drive innovation, create jobs, and give reasons to be excited about Africa.

And why shouldn't you?

In 2021, according to Partech, African tech startups raised $5.2 billion, with notable investments in sectors such as fintech, agritech, and e-commerce.

So far, in 2022, Africa is on track to raise $6 billion, with fintech dominating these investments.

Furthermore, African countries have also made significant progress in advancing financial inclusion. For example, Kenya's mobile money service M-Pesa now has over 28.3 million users and processes over $315 billion in transactions annually. This is just one example of Africa harnessing technology to improve access to financial services for its population.

But not only fintech is booming in Africa. The continent is also seeing high growth in agritech, logistics, edtech, and healthtech.

Let's take a look at some of the standout companies in these sectors:

Though raising capital isn't the only measure of success, it's a strong indicator of the potential and growth in these sectors. And with more investment comes more opportunities for job creation and economic development, and even more innovations.

It is a ripple effect that will only compound over time.

The next question on any investor's mind is how exits occur in these sectors. The answer is that as more African startups reach unicorn status, we will undoubtedly see more acquisitions and IPOs that lead to sizable liquidity events.

As context, the African startup ecosystem has seen a 567% increase in M&A from only $8B in 2020 to $57B in 2021. Many do not know these numbers because most of these M&As are undisclosed given the intricacies of the continent. 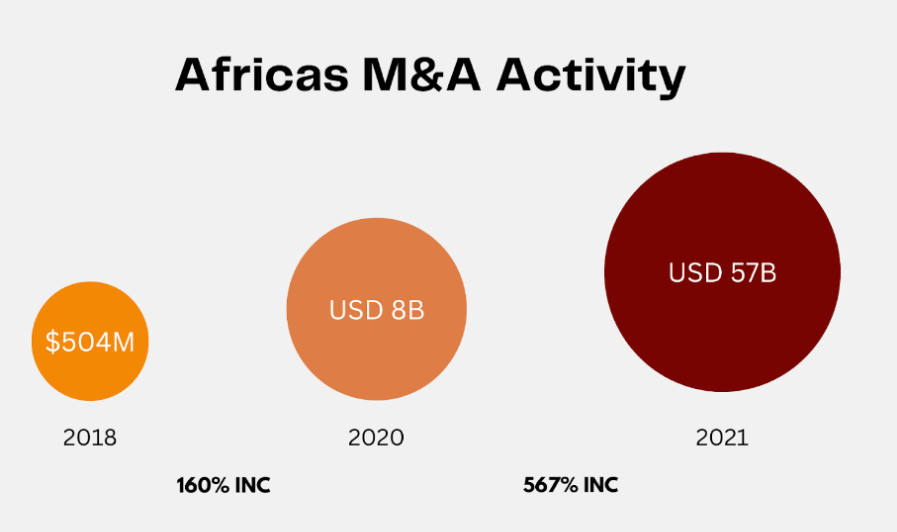 Some interesting M&As that have happened in the past couple of years include:

The above acquisitions are intercontinental, as companies outside of Africa acquired these startups. However, there has been even more interesting—let alone increasing—M&A activity within the African continent.

These acquisitions show that not only are African startups attracting interest from global players, but also garnering investment and activity happening within the continent.

What is driving this growth in M&A activity?

Let’s not forget that Africa's population is projected to reach 2.5 billion by 2050.

Moreover, its consumer spending is expected to reach $6.7 trillion by 2030, creating enormous opportunities for businesses operating on the continent.

In addition, governments are investing heavily in digital infrastructure and encouraging entrepreneurship, which creates even more favorable conditions for growth in these sectors.

As the African startup ecosystem continues to thrive and attract interest from both local and international investors, we can expect to see even more success stories in the coming years.

The potential is there; now, it's just a matter of executing against that potential and driving the innovation that will shape Africa's future.