Armageddon in Retrospect: FTX and SBF 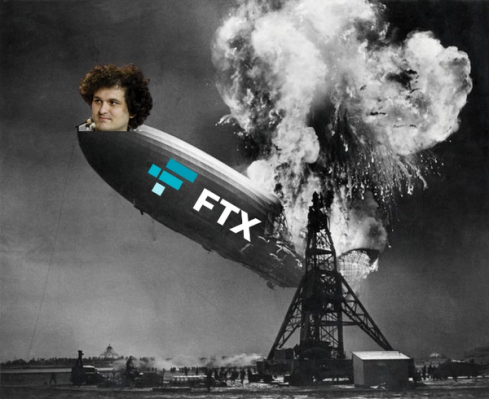 Above: Things full of hot air tend to blow up and go down in flames.

Weeks like these remind us why the apocryphal Chinese expression “May you live in interesting times” is construed as more curse than blessing.

2022 seems to be doing its best impression of Lee Corso.

Just when we thought contentious midterm elections were behind us, missiles strike Poland.

Just when we thought Sam Bankman Fried would go quietly into the night, he tweets gibberish and has the gall to petition investors for more capital.

To paraphrase a friend, Lenin is having a field day (i.e. "There are decades where nothing happens, and there are weeks when decades happen.")

Put simply, stories—and weeks—like these undergird Twain’s aphorism that “Truth is stranger than fiction, but it's because Fiction is obliged to stick to possibilities; truth isn't.”

Each of the above events deserves its own article. For the purposes of your time and my sanity, I want to discuss what the implosion of FTX by means of SBF (holy acronyms!) signifies for web3 and crypto writ large.

The facts that have thus far come to light around this incineration of capital, crypto, and consumer trust resemble a cinematic collaboration between Michael Bay and James Cameron.

Read the brief synopsis below—it’s fantastic in the literal sense of the term:

By now if you haven’t heard of FTX imploding like the Hindenburg, let’s bring you up to speed. [Pundits have h]ailed [it] as the worst thing to occur in the Crypto space; and they’re right.

The CEO of Binance, Changpeng Zhao (CZ) called in his stake of over half a billion dollars of FTT token. Citing uneasiness of illiquidity. It was revealed in early November FTX’s and Alameda’s high valuations were due to illiquid altcoin assets.

The resulting surge of outflows triggered by CZ & Binance caused the insolvency of both companies.

Binance was in talks to buy FTX; however, when they saw FTX’s books; a sum of 8 billion in liabilities, they promptly declined…

This is the most public and destructive event in Crypto. It is as pivotal as Mount Gox causing the Ethereum [Fork]. But the chaos and carnage is somehow more of an idiocracy than the 08’ financial crisis. The warning signs were clear as day, but we ignored them. Ironic given Crypto was borne of financial corruption and scandal.

The above emphasis is mine. More on that later, however, in the face of explosive, sensational events, nuanced takes are usually few and far between. This instance proves no exception.

[I]n a wide-ranging interview on Sunday that stretched past midnight, [Bankman-Fried] sounded surprisingly calm. “You would’ve thought that I’d be getting no sleep right now, and instead I’m getting some,” he said. “It could be worse.”
…
He has also found other ways to occupy his time in recent days, playing the video game Storybook Brawl, though less than he usually does, he said. “It helps me unwind a bit,” he said. “It clears my mind.” 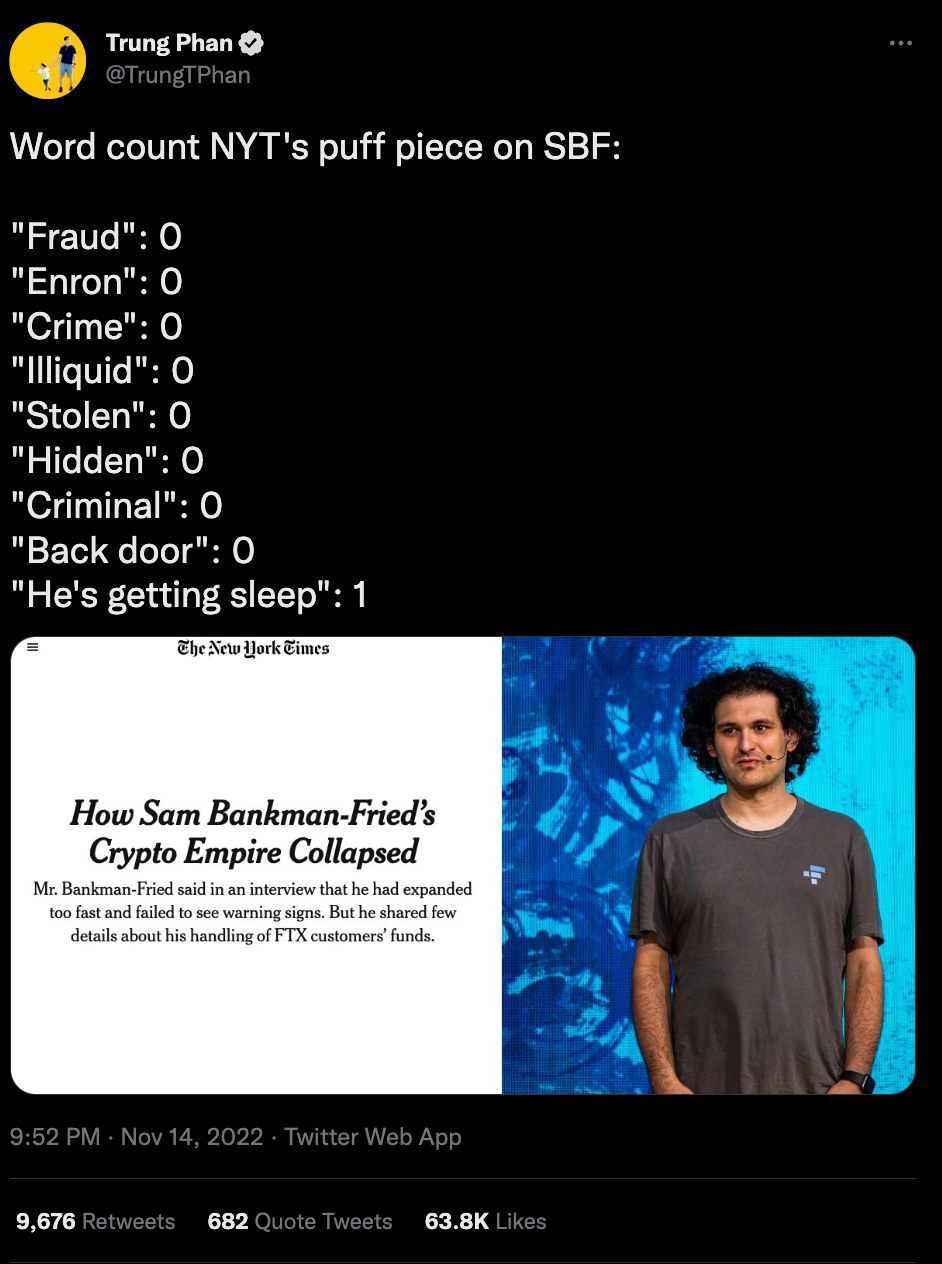 "All the News That's Fit to Print" indeed.

The above aside, I worry that many are drawing the wrong conclusions from the calamity of FTX and SBF.

What occurred is not an indictment of either web3 or crypto. Rather, it is one of human nature.

To condemn crypto because of immorality and misdeed is to sacrifice progress at the altar of folly.

Put simply, that which killed FTX was not crypto, itself, but rather that fatal mix of hubris and greed all too common to humanity.

To say that the FTX debacle proves crypto will never work is similar to arguing that Enron’s downfall showed energy futures contracts will never work. It’s just not true. 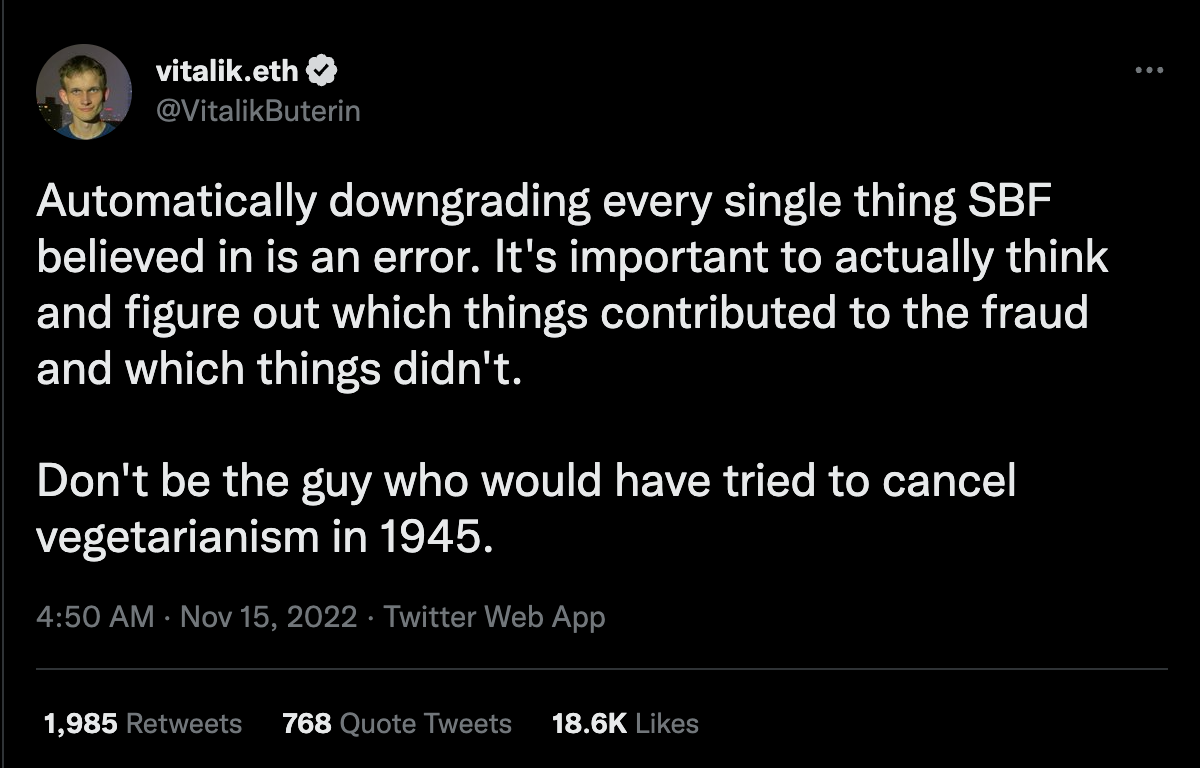 Unfortunately, this is not anything new. It’s a tale as old as time.

Look no further than Gordon Gekko in Wall Street or John Tuld in the most realistic Wall Street film of all time, Margin Call.

Though the latter clip is worth a watch in full, the below excerpt—emphasis mine—is vital:

So you think we might have put a few people out of business today. That it's all for naught.

You've been doing that every day for almost forty years, Sam.

And if this is all for naught then so is everything out there [points to the skyline of New York City].

It's just money; it's made up. Pieces of paper with pictures on it so we don't have to kill each other just to get something to eat.

It's all just the same thing over and over; we can't help ourselves. And you and I can't control it or stop it, or even slow it, or even ever-so-slightly alter it. We just react.

Where there’s smoke, there’s certainly fire. That said, a fire can start in many different ways: a gas leak, a short circuit, or a toddler with matches.

Per Occam’s Razor, that’s likely what happened here. The ashes of this collapse derive from the mishandling of useful tool (i.e. crypto, or the matches) by unsteady hands (i.e. SBF, or the toddler). Unfortunately, he damn near took the entire house down with him.

SBF is neither mastermind nor maniac.

He is no more than sheltered, immoral child who succumbed to the temptations of greed and hubris. What’s more, much like an immature kid, he refuses to admit wrongdoing or take any sort of accountability.

C.S. Lewis’ Surprised by Joy says it far better than I ever could:

I am here struck by the curious mixture of justice and injustice in our lives. We are blamed for our real faults but usually not on the right occasions.

When we gaze at ourselves in the looking glass, we ought not focus on the splinter that is web3, but rather the plank that is human fallibility.

If anything, this catastrophe represents the failure of subjective, centralized financial infrastructure, not objective, decentralized cryptographic innovation.

Just like the fall of Enron and LTCM’s blow up, we compromised and saw what we wanted to see, not what was actually in front of us.

On that note, I stand firmly by what I wrote months before:

The disintermediation of trust, from partial third parties to objective mathematics and cryptography, represents an innovation the likes of which I have never seen in my young life.

With that, I leave you in the steady hands of Fred Wilson and Katie Haun:

The most important software innovation of the last decade, which started with the Bitcoin white paper fourteen years ago, is the emergence of open-source software and decentralized protocols that are the foundation of web3. These protocols have survived recent market volatility. It is the promise of software that is not controlled by a company, but instead by an open-source community with built-in safeguards and increased transparency relative to today’s tech and financial systems, that gives us so much confidence in the future of web3…

When web3 becomes a credible alternative to web2 for the masses, large centralized companies like Facebook, Apple, Amazon, and Google will have to compete for access to our data thus redefining how we use the web. Software development will be more open-source and composable. And large financial institutions like banks and brokerage firms (which includes the FTXs of the world) will no longer control our assets and lend them out without our permission.

This is another hard moment for web3 and we will see negative headlines about “crypto” for some time. But it’s important to remember that these headlines are all about the speculating/trading part of web3. The much more important underlying software innovation continues unabated. And that is what we remain so excited about and will continue to fund and champion.