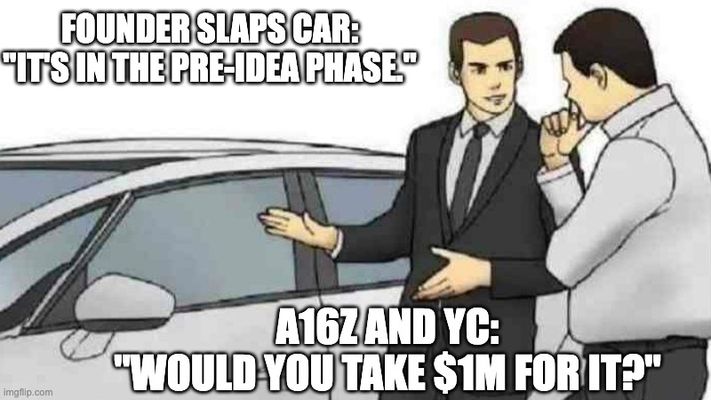 Andreessen has been piloting an accelerator concept for over a year and announced it publicly this last Sunday. The program is called START and it offers early-stage founders up to $1M in exchange for an undisclosed amount of equity. You can check out the a16z page here and even take 20 minutes to apply (it's much shorter than the YC application).

"If founding a technology company is a dream of yours - even if you don't yet have a fully formed idea and haven't quit your day job - we want to hear from you." - a16z's START

This might be the final form for firms that have pushed rounds earlier and earlier over the course of the last few years. In this theme, Sequoia announced a similar program last month. As I browse the profiles of participants in START's pilot program it's easy to spot the usual suspects: Former Global Head of Commerce at Unicorn A, Former VP of Product at Unicorn B, etc.

These programs are formalizations of a common VC strategy made popular by the famed PayPal Mafia: New founders spinning out from the core teams of Unicorn companies are typically good bets. In the past YC has dominated this niche of new "out of network" founders looking for cash and guidance, but Andreessen presents an interesting new option.

If you're fresh out of college, or even still in college, I think YC is still going to be your top choice. YC is Paul Graham pulling you under his wing to give you startup tips that feel like life lessons. It's ambitious young people trading "what ifs" over a box of pizza. It's cool.

On the other hand, there's something about Andreessen that seems like it could cater to a more mature group of new founders. Andreessen is Andrew Chen explaining boardroom dynamics and telling early Uber war stories. It's a group of seasoned technology leaders talking markets over a bottle of red wine at Madera. It's the big leagues.

Time will tell how successful these new programs are. Overall though, it seems like a welcomed menu expansion for anyone considering the founder path.

Click here to check out the full article from Natasha Mascarenhas at TechCrunch.